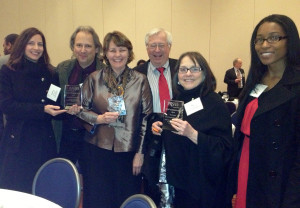 Crosby Marketing Communications has won three Best in Maryland Awards in the 2014 awards competition of the Maryland Chapter of the Public Relations Society of America (PRSA).
Crosby won:
– First Place in Community Relations for The Wallace Foundation’s “National Summer Learning Demonstration Project and Study,” implementing community-based social marketing programs in five urban school districts that helped generate awareness of and participation in a national study of voluntary summer learning programs.
– First Place in Brochures for the “General Donation Information Card,” created for the Department of Health and Human Services’ Health Resources and Services Administration’s (HRSA). The engaging piece explains organ donation and transplantation basics and communicates how one donor can save up to eight lives.
– An Award of Excellence in Videos for HRSA’s animated “Organ Donation and Transplantation: How Does It Work?” video, which informs viewers about the process of organ donation and transplantation.
The Best in Maryland Awards is presented annually to honor public relations practitioners who, in the judgment of their peers, have successfully addressed communications challenges with exemplary professional skill, creativity and resourcefulness. The 2014 awards ceremony took place in Baltimore in December.